This article originally appeared in Green Builder's Code Watcher and was republished with permission.

While maybe not intentional, many builders are cheating the IRC code when it comes to kitchen exhaust rules. Here’s guidance on how to meet the code with an active makeup air solution.

Beginning in 2009, the IRC included a kitchen makeup air requirement. This was done because today’s homes are built to be more energy-efficient (tighter) and that was restricting the air infiltration needed as “makeup air” for exhaust fans.

Without makeup air, even a powerful exhaust fan can only remove as much air from the home as is permitted via infiltration. If exhaust isn’t handled correctly, three problems can occur:

The IRC tried to get ahead of this problem in 2009 when it included a kitchen makeup air requirement. A paragraph in Chapter 15 of both the 2009 and 2012 IRC reads:

M1503.4 Makeup air required: Exhaust hood systems capable of exhausting in excess of 400 gfm shall be provided with makeup air at a rate approximately equal to the exhaust air rate. Such makeup air system shall be equipped with a means of closure and shall be automatically controlled to start and operate simultaneously with the exhaust system.

The MUAS modulates air flow in proportion to the exhaust, filters particulate matter, tempers cold air with an optional heater kit, and can be set up for a variety of pressure schemes.

Since the 2009 code was adopted many builders have tried to meet ventilation requirements by leaving a large hole or several holes in the exterior wall. However, allowing untempered air into a house reduces energy efficiency and comfort.

Builders also employ a “passive” solution, which is like a hole in the wall but again it relies on a very large opening in the wall, or multiple holes, to keep the level of depressurization below the backdrafting threshold. The passive solution does not accommodate direct filtering and tempering since it is not fan forced.

“Today’s tight houses intensify the need to ventilate correctly,” says Mark Wald, central regional sales manager for Fantech. “One major area is kitchen exhaust, which is important because cooking is a major polluter of indoor air. It’s important to capture and remove as much of the pollutants as possible.”

While powerful kitchen exhaust fans can whisk away pollutants, they can only operate if the air brought into the house equals the air driven out. “A kitchen exhaust fan is trying to exhaust at 400 cfm rate and is creating a vacuum in the home because the ‘leakiness’ isn’t there to allow air to come in. So it will come in any way it can, including down a fireplace chimney or furnace vent system. Clearly that is a safety issue in terms of carbon monoxide and toxins coming into the house,” Wald emphasizes.

Wald points out that the 2018 IRC has tried to refine the guidelines even further. “2018 stipulates that when you exhaust air you need to provide makeup air that keeps the depressurization of the house at to no more than 3 pascals (unit measure for pressure). This 3 pascals depressurization can not be met or maintained by a passive solution,” he says. “Using a passive air makeup would require a pretty good sized hole and even if you created a large enough hole, wouldn’t it be nice to run it through a filter and heat it up in the winter before delivering it to the kitchen? An HVAC contractor is not going to install a filter or heater unless there is a fan to move it.”

The only fail-safe solution for exhaust ventilation is one that is powered by a fan, such as Fantech’s Makeup Air System (MUAS). This system is triggered when the compensated exhaust system is energized. The MUAS damper opens and the fan is powered on. The fan stays in lockstep with the exhaust fan by automatically speeding up or slowing down.

Wald is pleased the code is pushing for safer, more comfortable and energy-efficient houses, but he points out that the code is only as good as its enforcement and that it doesn’t go far enough. “The code only requires a makeup system at a size 400 cfm or larger. There are high-performance homes using 300 cfm exhaust systems,” he reminds. “A conscientious builder would say, ‘The exhaust system is right for the size of the appliance but because the home is so tight, I need to provide makeup air.’” 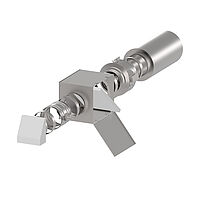 Code officials need to start enforcing the kitchen ventilation code. Code authors of the 2018 IRC recognized that and required that a tradesperson perform a depressurization test on each house. “But very few builders ask for that test or see the report,” Wald notes. “The test requirement only appeared in the 2018 code version and probably less than 1 percent of communities are following that code.”

Maybe it will be the forward-thinking folks in the field that will bring this issue to light–and compliance.

Doug Quinn, general manager of Bob’s Heating and Air Conditioning in Washington, makes a point of meeting the IRC M1503.4 code for makeup air even though it hasn’t always been easy. “We do work in just about every jurisdiction up and down the Puget Sound Region,” he says. “Just because one jurisdiction is overlooking the requirements doesn’t give us the right to overlook it. The whole idea of that code is health and safety.”

Want more indoor air quality insights from Fantech? Subscribe to the Fantech newsletter to get the latest IAQ trends and product updates delivered to your inbox.

Fantech makes air quality control easy thanks to decades of research, development, and refinement that continue to push the industry forward. Learn which Fantech solution is the best fit in your next project today.